I'm looking for the following...

The Minister of Immigration has introduced a Bill into Parliament today that proposes to radically change the Immigration New Zealand (INZ) approach to the management of both resident and temporary visas in response to the COVID-19 pandemic. 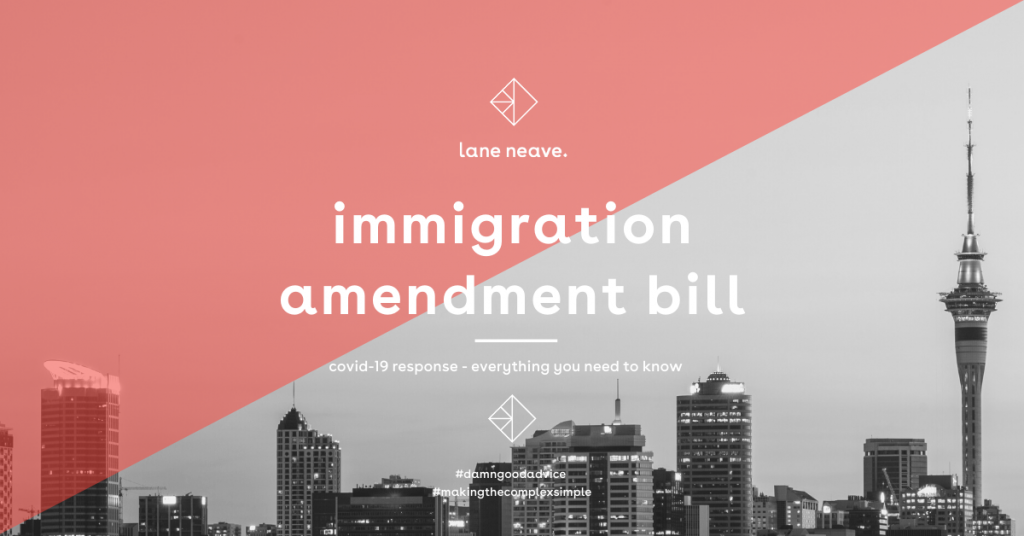 The Minister has advised that the changes introduced through the Bill will ensure that “our immigration system is flexible and responsive to this emergency situation”.

The need for this Bill is perhaps no surprise, given that 1,000 employees of INZ are still not able to work, in any form, as at the date of writing this article.  Of those 1,000 employees who are not able to work from home, we understand INZ is starting to introduce some back into their offices so they can recommence work, but a mere 20% maximum floor loading has been set for staff that are able to return to work under Alert level 3 and only 50% floor loading is contemplated under Alert Level 2.  This is very concerning given that as at 27 April 2020 there are approximately 350,000 temporary visa holders onshore where:

Of those work visa holders it should be noted that 80,000 of them have had their visas automatically extended under the Epidemic Management Notice, so they all expire on 25 September 2020.  In part based on INZ’s current inability to function at a reasonable processing level a radical solution is required to rescue the situation and prevent a disaster in late September.

What we have here is a radical Bill with significant discretionary powers bestowed on the Minister of Immigration, and those powers appear fairly unrestricted.  While of course it is for another time to review how a Government department like INZ got themselves into this position, the focus now must be in terms of what this Bill is looking to do so the market can make submissions to the Select Committee before this Bill becomes law on Friday 15 May 2020.  Yes, that date is not an error; this will be law on Friday next week.

There are essentially eight discretionary powers given to the Minister under the Bill.  While the Bill is time limited as the powers automatically revoke 12 months from the date of enactment, the powers are wide ranging and provide the Minister of Immigration with unprecedented ability to use discretionary decision making to potentially affect the lives of thousands of migrants at the strike of a pen.

We set out below this article a summary table of the powers, the “safeguards and limits” and the examples of how the power concerned may be used.  There is also a downloadable PDF version of the table below.

In short form, here are the powers set by this Bill and what INZ communicated each power could be used for:

This is intended to relax employment conditions, such as allowing employee redeployment to a different employer or location more easily without an application.

3. Extend expiry dates of visas for classes of people

Intended to be used to extend visa expiry dates for persons offshore who may not be able to travel to New Zealand within the validity of their visa.  Typically this will allow the Minister to extend these visas up to six months.

4. (a) Grant visas to individuals in the absence of an application

The ability to grant a visa to an individual who may be unable to make an application (e.g. due to illness).

4. (b) Grant visas to classes of people in the absence of an application

The ability to grant visas to classes of people who are unable to make an application (e.g. due to illness).

5. To waive any regulatory requirements for certain classes of application

To waive fees or other application requirements that may currently be impractical to meet.

6. To waive the requirement to obtain a transit visa in an individual case

To waive transit visa requirements for individuals who have humanitarian reasons for transiting through New Zealand to get to another country.

7. To suspend the ability of classes of people to make applications for visas or to submit expressions of interests in applying for visas

To suspend new applications for particular visa categories until global border restrictions are loosened and applicants are able to travel to New Zealand (a suspension may be for a period not exceeding three months).

To prevent private aircraft crew with deemed entry permission who are not complying with PPE requirements from entering New Zealand.

The Minister has advised that the powers bestowed on him will also have appropriate safeguards and limits.  However, we are very concerned that these, from a legal perspective, will restrict discretionary decision making to the positive examples that INZ have raised above that are directly related to COVID-19.

These are the three listed:

All eight powers will be automatically revoked (cancelled) in 12 months from enactment (15 May 2021).  This is not a reasonable limit at all; a lot of damage can potentially be done in a 12 month period.

2. Powers only exercisable where responding to COVID-19

Most powers (apart from powers 4 (a)) have to be exercised where responding to COVID-19.  This is a shallow limit and does not restrict the Minister from taking away legal rights available to those migrants under the current legislation.  All the examples provided by INZ communicate a positive need to help those affected; however, they can also be used to take rights away from people.  For example, international student visa holders could have their right to work removed due to increased unemployment and a view to restrict them taking employment opportunities away from New Zealanders.

3. Publication requirement, disallowance and presented to the house

Special directions affecting a class of visa holders or people will, along with an explanation of its effect, be notified in the Gazette and published on MBIE’s website. In addition, the special directions are “disallowable instruments” for the purposes of the Legislation Act 2012, and will be presented to the House of Representatives.

This essentially allows the House to stop the exercise of discretion although they can simply pass through with majority.

This Bill is being rushed through Parliament at record speed.  Here is the timeline for passing of this Bill:

The accelerated speed of the enactment of this wide ranging, power piece of legislation is a cause of concern, particularly so where the Bill at this stage does not restrict some of the powers bestowed on the Minister.  As above there are limited safeguards and no confirmation that the powers exercised be restricted to the limited scenarios identified and communicated by INZ in their recent press release.

The broad powers bestowed on the Minister, in a piece of legislation that has been quickly drafted and which will be enacted within two weeks of introduction to the House, should be of concern to migrants and their employers.

While it has been expressed that the Bill has been introduced in good faith to allow INZ to respond directly to the operational challenges that have surfaced due to COVID-19, discretionary powers are discretionary.  There is little to prevent the Minister utilising the powers outside the direct health response to COVID-19, particularly in the absence of appeal rights for the exercise of these powers.

It is quite clear to us that we appear to have a piece of legislation that is the ambulance at the bottom of the cliff.  Somehow a significant and important department of MBIE have 1,000 employees at home not able to work remotely.  It is unfortunate that such a powerful and discretionary instrument is required in part to fix this situation and with that, put at risk the ability of migrants to have access to justice to be able to exercise the rights bestowed on them under the current Immigration Act 2009.

While there will be a Select Committee process underway soon, like most of the reform changes made by this Government in the immigration sector very small changes will be made (if any) to this legislation.  It is however hoped that changes are made to better restrict the powers of the Minister to the examples that have been listed in the Press Release, and also, allow for greater transparency and accountability for that decision making outside the Beehive to manage the use of this unbridled power.

We will be producing a webinar on the legislation following enactment once the final details of the amendment have been passed and more detailed information can be communicated at that stage. 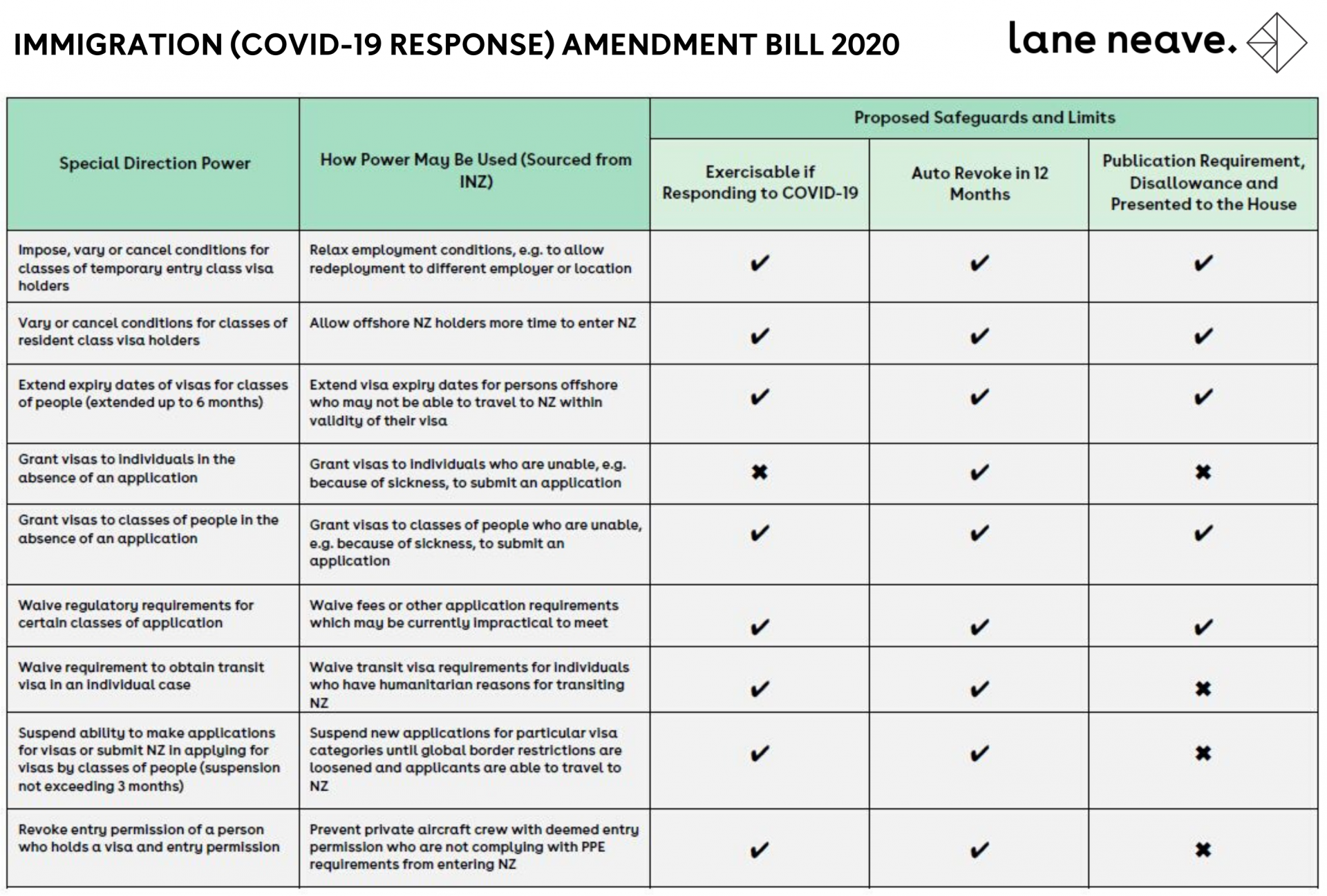 Our team issue regular newsletters on immigration-related topics as well as up-to-the-minute alerts when immigration policy changes are announced.

Click here for other COVID-19 or Immigration Law articles.

Mark Williams
Rachael Mason
We use cookies on our website to give you the most relevant experience by remembering your preferences and repeat visits. By clicking “Accept All”, you consent to the use of ALL the cookies. However, you may visit "Cookie Settings" to provide a controlled consent.
Cookie SettingsAccept All
Manage consent

This website uses cookies to improve your experience while you navigate through the website. Out of these, the cookies that are categorized as necessary are stored on your browser as they are essential for the working of basic functionalities of the website. We also use third-party cookies that help us analyze and understand how you use this website. These cookies will be stored in your browser only with your consent. You also have the option to opt-out of these cookies. But opting out of some of these cookies may affect your browsing experience.
Necessary Always Enabled
Necessary cookies are absolutely essential for the website to function properly. These cookies ensure basic functionalities and security features of the website, anonymously.
Functional
Functional cookies help to perform certain functionalities like sharing the content of the website on social media platforms, collect feedbacks, and other third-party features.
Performance
Performance cookies are used to understand and analyze the key performance indexes of the website which helps in delivering a better user experience for the visitors.
Analytics
Analytical cookies are used to understand how visitors interact with the website. These cookies help provide information on metrics the number of visitors, bounce rate, traffic source, etc.
Advertisement
Advertisement cookies are used to provide visitors with relevant ads and marketing campaigns. These cookies track visitors across websites and collect information to provide customized ads.
Others
Other uncategorized cookies are those that are being analyzed and have not been classified into a category as yet.
SAVE & ACCEPT